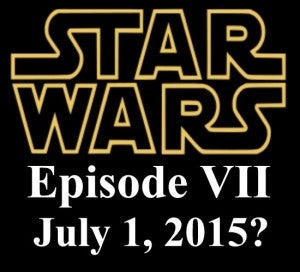 While everyone is speculating about what the story will be and who the director will be for Star Wars Episode 7, we were surprised that there doesn’t appear to be a lot of speculation in regards to the release date.  In a conference call to announce the Lucasfilm acquisition, Disney CEO Bob Iger did reveal that the plan was to release Star Wars Episode 7 in 2015, but he didn’t indicate even what season fans could expect to see the film.

However, since every previous Star Wars movie has been originally released in the summer, it’s probably a pretty good bet that Star Wars Episode 7 will also be a summer release. Given the expense of making a large scale science fiction movie, it’s also probably safe to assume that Star Wars Episode 7 will have a $200 million plus budget. When Disney is spending that type of money, it’s virtually guaranteed that they will want to release the movie in summer to take advantage of kids being out of school, which makes multiple viewings more likely.

Given the historical consistency of Star Wars movies being released in mid to late May, can we expect the same for Star Wars Episode 7? Possible, but we asked some of our movie sources what they thought. It turns out there is a big problem with Star Wars Episode 7 being released in May 2015, and it’s called the Avengers 2. The Avengers sequel is already set to be released on May 1, 2015, and Disney is expecting it to dominate the month of May and a good part of June just like the original.

Disney will likely not want to release Star Wars Episode 7 in May, because they will not want to cannibalize their Avengers 2 ticket sales. Of course, Disney could push back Avengers 2, but that’s not likely to happen. Since Avengers 2 has an established cast and director, it will be much easier for the film to hit it’s early summer 2015 release date. If either picture needs the extra time of a little later release date, then it’s probably Star Wars Episode 7.

While our movie sources don’t rule out the possibility of a June release date, they tend to think Disney will want to provide a little bit more separation from The Avengers 2. The July 4th weekend has traditionally been a huge weekend for the movie industry and also a popular time for science fiction movies. Our prediction is that Disney will target the July 4th weekend with an early release date of Wednesday, July 1, 2015. After all, how can they resist using “The Force of July” as a tagline in their marketing campaign?

Also, we should point out that while we admit there is a little bit of speculation going on here, Comicbook.com was the very first site to accurately report that the Avengers 2 release date would be May 1, 2015. We were right with Avengers 2. Will we be right with Star Wars Episode 7?

Dragon Ball Super Reveals the Top Characters as Voted By You