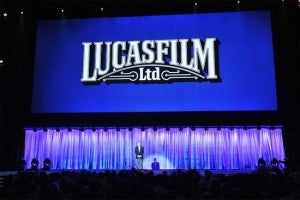 Looking back at how Disney promoted the Live Action presentation in the weeks before D23, Disney teased, “Go behind the scenes at The Walt Disney Studios with this revealing look at our upcoming roster of live-action adventures from Disney, Marvel, and Lucasfilm.” While this tease doesn’t exactly promise anything, it did seem to suggest that Lucasfilm would be part of the revealing look.

Many were hoping for an official confirmation on the return of the original cast, even dreaming of Harrison Ford, Mark Hamill, and Carrie Fisher walking out on stage. At the very least, most were expecting either a Star War Episode title reveal or an exact release date announcement.

For general Disney fans who attended the event, they likely could not have been more thrilled with the number of stars involved in the presentation. However, for those who came just to see Star Wars, well, they groaned and booed when it became obvious that there were going to be no Star Wars surprises.

Disney never guaranteed anything, so they were under no obligation to announce anything about Star Wars Episode VII. But Disney is an entertainment business, which is not in the habit of disappointing fans, so the lack of announcements does beg the question of why they didn’t reveal more about what is one of their most highly anticipated projects.

While this is all speculation, the lack of announcements could very well be for specific reasons. Everyone has been pretty much assuming that the original cast is returning, but what if they aren’t? Mark Hamill and Carrie Fisher were at Star Wars Celebration Europe, but Harrison Ford was not. Of course, Harrison Ford is currently working on a number of movies, so it could simply be that his schedule doesn’t really allow for a lot of fan events. However, it could also be that Harrison Ford hasn’t signed a contract to return yet. It would make sense that Disney wouldn’t want to announce the original cast return unless they had all the key players under contract.

As far as the Star Wars Episode VII release date, we’ve previously expressed our suspicions that Disney might be planning to give Star Wars Episode VII the May 1, 2015 release date that they’ve been holding for Avengers: Age Of Ultron. All previous Star Wars movies have been released in May, but it’s doubtful that Disney would release two blockbusters in close proximity because there are only so many theaters to go around.

Of course, since Star Wars Episode VII has yet to even start filming, Disney is also likely worried if the film will be ready for May 2015. The last thing Disney would probably want to do is announce a release date and then have to push it back, because the entertainment press would then start labeling the film as having problematic production delays. Disney could be saving the release date announcement until they are a little further in production.

As to why Disney didn’t announce the title for Star Wars Episode VII is probably the most difficult question to answer. Considering how long Disney has been working on the project, there is almost surely a title they have in mind, but perhaps they have not made a final decision. It’s also possible that the title reveals a component of the movie that Disney is not yet ready to announce.

Star Wars Episode VII: Why Is Disney Not Announcing Anything?