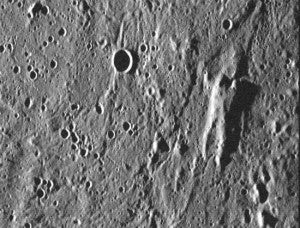 While Disney has yet to officially confirm if Harrison Ford will return as Han Solo in Star Wars Episode VII, there has been a Han Solo sighting in the most unlikely of places. The MESSENGER spacecraft is orbiting the planet Mercury, and it happened to snap a rather unusual image.

The image of a portion of Mercury's surface shows what is being described as "an elevated block in the shape of a certain carbonite-encased smuggler who can make the Kessel Run in less than twelve parsecs."

And while we hate to ruin any theories of a secret society of Star Wars fans living on Mercury, it turns out that it's not the first time that people have seen meaningful shapes in random landforms on Mercury. NASA points out that the shape could have been formed by material ejected during the basin-forming event.