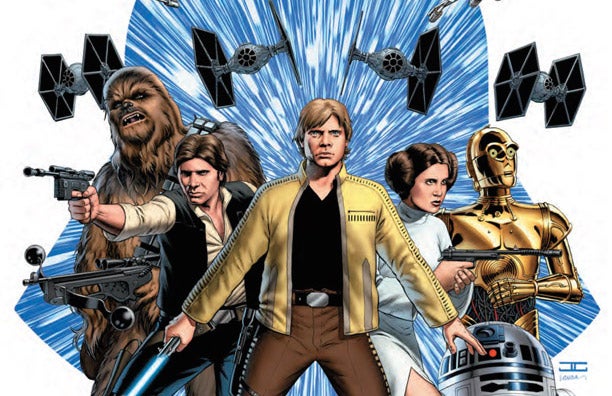 Star Wars put the power of the Force into January 2015's comic book sales, with Marvel Comics taking a lion's share of the industry both in dollar and unit shares.

Naturally, Star Wars #1 was the best-selling comic book of the month. In fact, the blockbuster title by Jason Aaron and John Cassaday was the best selling title in decades. As ComicBook.com confirmed last year, sold more than an one million copies of Star Wars #1—a feat not seen in the industry since the early nineties (by today's standards, sales topping 250K are cause for celebration). Marvel's Amazing Spider-Man #12 and #13, Thor #4 and slew of newly-launched titles like Uncanny Avengers #1, Wolverines #1, and Ant-Man #1 rounded out the House of Idea's contribution to January's Top 10 list. With 79 comics shipped, Marvel claimed a gargantuan 41% of the industry's dollar share and and 45.6% of its unit share.

Coming in at a sizable second was main competitor DC Comics, who only grabbed two of the top ten slots. Batman #38 was the publisher's top performer, placing second in the top ten, while Justice League #38 came in at number nine. With 86 comics shipped, DC claimed 24% of the industry's dollar share and 27% of the industry's unit share.

Image came in as the industry's third best-performing publisher, with The Walking Dead #136 placing as the month's tenth best-selling title.

Overall, not a bad way to start the new year. And with Darth Vader #1 set to top 300K orders and Princess Leia #1 reported to top 200K orders, it looks like Marvel's Star Wars franchise will keep the industry running strong for the foreseeable future.