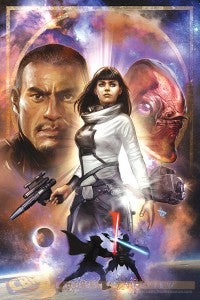 Dark Horse Comics announced today that Star Wars: Legacy, the series that takes place 100 years following the original Star Wars Trilogy and examines the long-term impact of those events on the galaxy, will return in 2013.

The title will be written by Corinna Bechko and Gabriel Hardman, recently of BOOM! Studios' Planet of the Apes comics, and will feature covers (or at least a first issue cover, pictured) by Dave Wilkins, according to Comic Book Resources.

The original series, which ran for fifty issues plus a wrap-up miniseries, was created by writer John Ostrander and ran from 2006-2011. CBR had no additional information on the story of this new iteration except that "will carry the Skywalker bloodline in a new way. Namely, the series lead will be a young woman who is the great-granddaughter of original movie characters Han Solo and Leia Organa! While the pair have born twins in the previous expanded universe tales, the status and the outlook of this new face remain unknown."