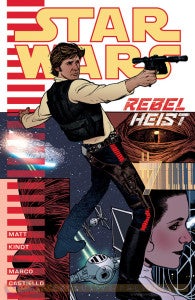 The story, which will revolve around Han Solo, will kick off in April as a four-issue miniseries illustrated by Star Wars comic veteran Marco Castiello. The premise is that each issue will revolve around one of the central characters from the original Star Wars trilogy and will give fans a view into how the regular folk of the Star Wars universe view the characters that moviegoers and comic book fans have come to know and love over the decades.

"So that was the springboard. It would be cool to have four core characters, and each issue would play with that idea," Kindt explained. "Princess Leia and a spy character who she teams up with, but it's all from the point of view of the character Princess Leia teams up with. Viewing Princess Leia, viewing Han Solo, viewing Chewbacca, viewing Luke through the guise of a normal dude. Han Solo is like the coolest character ever, so it was fun to write that, where this guy's sort of starstruck by him -- just like I would be. Then they've got this mission to do, and doing a real mission where everything's on the line, and your life is in danger -- by the end of that issue, Han Solo's not so cool anymore. This guy's scared out of his mind. Han Solo's kind of reckless. That was my way in, almost viewing those characters in a childlike way, like I did when I was a kid, and you look up to Han Solo as the coolest. It was easy to write after that." 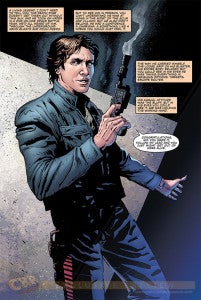 It won't be a Phil Sheldon/Norman McCay situation, though; fans won't be introduced to one narrator who will be the lead in the series. Rather, the series leads will still be the series leads, but each issue will bring them together with a different "average Joe" who will view them for the audience.

"There's a different character in each one, and there's a narrator that pulls you through the story," Kindt told CBR. "Each issue is centered on one of the main characters. They're all tied together, though. Without spoiling too much, the fourth issue it all comes together, and you realize all these separate missions are part of something bigger. Like Han and Leia and Chewie they are actually separate from each other, but they're all working together towards some secret mission -- that kind of spoils it a little bit. [Laughs]"