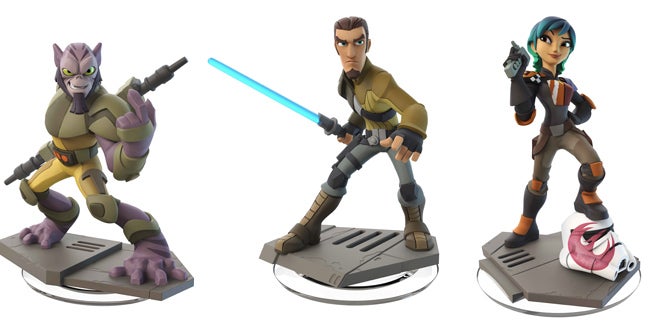 Ahead of the June 20th premiere of the special hour-long first episode of Star Wars Rebels Season 2 on Disney XD, Disney Interactive today revealed four characters from the series coming to Disney Infinity 3.0. Zeb, Kanan, Sabine, and the young padawan Ezra will make their way into the game with custom figures and the ability to play both within Toy Box and also within any Star Wars play set.

Like the characters announced so far from the Original Trilogy and The Clone Wars era, you will simply have to find an unlock token within the play set to let you use that character. Yes, as the screenshots tease, that means you can team up Zeb, who is based on Ralph McQuarrie's original design for Chewbacca, with the movie version of the Wookiee himself. That means Kanan and Luke can team-up in battle against Darth Maul. It even means that Sabine could team up with Yoda presumably against the First Order in the as-yet-unrevealed Star Wars: The Force Awakens play set.

Check out full shots of each figure, plus screenshots of them interacting with other Star Wars legends inside the "Twilight of the Republic" (Clone Wars) and "Rise Against The Empire" (Original Trilogy) play sets in the gallery below.

Also, intriguingly, the final line of the press release reads, "A Play Set based on Disney•Pixar's upcoming film Inside Out and a Marvel Play Set featuring Hulkbuster, Ultron, and other Marvel characters will also be available. Additional Disney Infinity 3.0 Edition figures and Play Sets will be announced in the coming months." We of course know that the Inside Out and Ultron Play Sets are coming, as well as The Force Awakens. But the plural on "Play Sets" after mentioning the first two makes it sound like those three won't be the only ones. The clamor for more Play Sets is the loudest in the current Disney Infinity community, and it seems like that desire is being answered.