Cast, crew and creators from the Star Wars Universe have gathered this weekend at Star Wars Celebration Europe, where today Star Wars Rebels Executive Producer Dave Filoni pulled back the curtain on Lucasfilm's highly anticipated animated series for Disney XD. The show's logo and a few details were revealed, as well as some of the production art that inspired the look of the show. Filoni talked about the huge influence of original Star Wars concept artist Ralph McQuarrie on the look and feel of the show, and revealing the series' unique logo and select designs. Filoni talked at length about the use of McQuarrie art as a springboard for the series, showcasing many works from the original trilogy, including landscapes and characters, and detailing how they inform the visual identity of Star Wars Rebels. "We'll have new characters," Filoni told the audience. "And we'll probably have some characters that you do know."

He didn't elaborate on that, but he did invoke some familiar names by saying that Ghost, the ship seen at right which is one of the key settings in the series, should feel like "home," comparing it to the Millennium Falcon. Star Wars Rebels is set to debut in the fall of 2014 as a one-hour special telecast on Disney Channel, and will be followed by a series on Disney XD channels around the world. 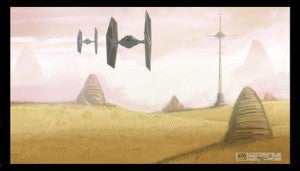