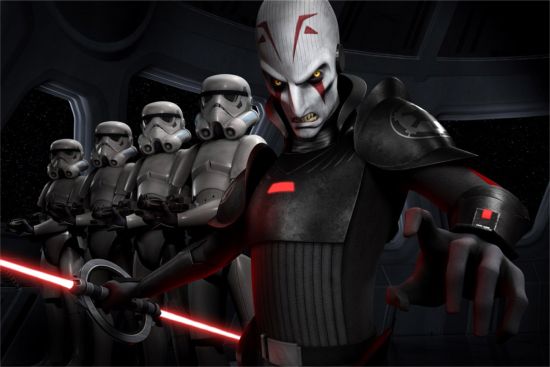 During the Star Wars Rebels panel at the 2013 New York Comic Con hosted by Lucasfilm's Pablo Hidalgo, Lucasfilm showed a behind-the-scenes video about Star War Rebels and also introduced the next great villain of the Star Wars universe. The Inquisitor is a black-clad, intimidating figure who will be featured in the upcoming animated series. In the behind-the-scenes video shown during the panel,  Star Wars Rebels executive producer Dave Filoni officially revealed the Inquisitor. According to Filoni, the Inquisitor is "tasked by Darth Vader to hunt down the remaining Jedi Knights." It was also revealed during the panel that Star Wars Rebels takes place about 14 years after the events of Star Wars: Episode III Revenge of the Sith. It is described as "a time in which the Emperor's rule is secure and the Empire is seeking to expand its power to Outer Rim territories. That leads Imperial forces to Lothal, a poor planet that initially welcomes the Empire on the promise of security and prosperity. It soon becomes obvious, however, that the Empire does not have Lothal's best interests at heart, as the Imperials exploit its people and begin recruiting young citizens to join TIE fighter and Stormtrooper academies, or to work in the Sienar Fleet Systems factory -- which builds TIE fighters -- in the planet's capital. Hidalgo showed new art focusing on Lothal, including the planet itself, a town, and alleyways, as well as an Empire recruitment poster." During the panel, Hidalgo revealed several new Imperial vehicles and designs created for the series: the All Terrain Defense Pod (AT-DP), the new AT-DP pilot, the Imperial Troop Transport, and the Imperial freighter. Star Wars Rebels is set to debut on Disney XD in 2014.