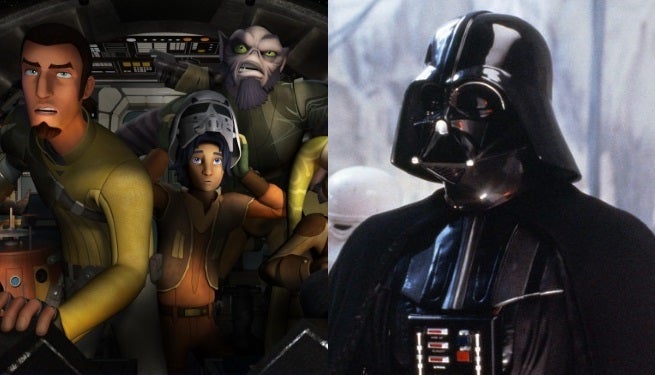 Star Wars Rebels: Spark of Rebellion will air on ABC on Sunday, October 26 at 7:00 p.m ET/PT. The ABC airing of the television movie will have a little something extra for classic Star Wars fans.

Executive Producer Dave Filoni states, "We wanted to do something special for the ABC broadcast. We've added a scene which gives audiences insight into the Inquisitor and includes a cameo by Darth Vader voiced by the distinguished actor James Earl Jones."

Star Wars: Spark of Rebellion delivered 6.5-million viewers in its premieres on Disney Channel and Disney XD around the world including the U.S. and 16 markets in Europe, Middle East and Africa, and Canada. The Star Wars Rebels weekly series on Disney XD has already been renewed for a second season.

Set between the events of Star Wars Episodes III and IV, the Star Wars Rebels story unfolds during a dark time when the evil Galactic Empire is tightening its grip of power on the galaxy. Imperial forces have occupied a remote planet and are ruining the lives of its people. The motley but clever crew of the starship Ghost – cowboy Jedi Kanan, ace pilot Hera, street-smart teenager Ezra, the "muscle" Zeb, warrior firebrand Sabine, and grumpy old astromech droid Chopper – will face threatening new villains, embark on thrilling adventures and become heroes with the power to ignite a rebellion.