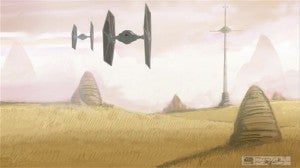 According to Lucasfilm, Star Wars Rebels is set between the events of Episode III and IV -- an era spanning almost two decades never-before explored on-screen. Star Wars Rebels takes place in a time where the Empire is securing its grip on the galaxy and hunting down the last of the Jedi Knights as a fledgling rebellion against the Empire is taking shape.

Lucasfilm's resident Star Wars expert, Pablo Hidalgo, will be hosting a panel on Star Wars Rebels at New York Comic Con this week. The panel will include a first look at new art from the series.

The Star Wars Rebels teaser trailer will air during Mighty Med, which premieres on Disney XD on Monday, October 7, 2013 at 8:30 PM ET.

Hades Announced for Xbox and PlayStation