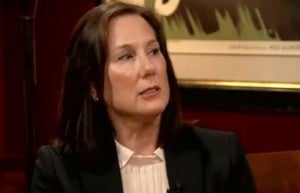 In the last of a series of videos released today about the future of Star Wars, George Lucas and Kathleen Kennedy talk about their feelings and the spirit of Star Wars. However, those who were hoping that the video series was building to some big announcement will be greatly disappointed.

The only official announcement made by Lucasfilm about Star Wars Episode 7 so far has been that Michael Arndt will write the screenplay. Many had been hoping that the fifth and final Future of Star Wars video might finally reveal the name of the director, but it looks like that information will be kept under wraps until next year.

Even though there are no spoilers in the video, Lucasfilm President Kathleen Kennedy does make a statement that should be pleasing to longtime Star Wars fans. Kathleen Kennedy said, “There are things that I want to preserve within the spirit of this company. And as it moves into Disney, I think that it’s vitally important to anything we create that we hold onto the spirit of what started all this.” We wonder if holding onto the spirit of what started it all might involve bringing the original cast back.