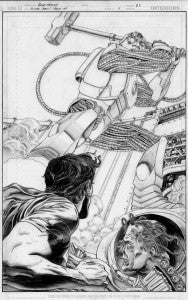 Over at DC's blog The Source, the publisher has announced that, beginning with next month's Action Comics #4, the series will feature back-up stories (no longer called Second Features, DC's previously-preferred term). The stories will be eight additional pages per month, and written by Sholly Fisch, who's currently busy at DC doing The All-New Batman: The Brave and the Bold. The stories will apparently tie directly into the main, 20-page features by Morrison.

The stories will be drawn by Brad Walker for the first pair Steel will be featured in #4, with Jonathan and Martha Kent starring in their own backup in the fifth issue. The Kents's story will continue into a backup in the sixth issue drawn by Chriscross, followed by a backup in #7 with no star yet announced which will be drawn by Walker again. The publisher also reaveals that Action Comics #8 will wrap Morrison's first story arc in an oversized story by Morrison and regular series artist Rags Morales (who will be taking a break from the title in issues 5 and 6, replaced by superstar artist Andy Kubert, presumably in order to accommodate the extra time the longer story demands).

DC posted a page of art from Brad Walker's Steel backup, starring an early version of steel's armor that has one of those strange circular designs on its chest not unlike Iron Man's costume has. Regular readers of the newly-relaunched series will remember that Steel's civilian (well, not really "civilian" as such, since he's a military man, but his non-superhero) identity, John Henry Irons, quit the military-contracting job he was working after disagreements with Lex Luthor regarding whether or not Superman deserved human rights. Luthor, along with General Sam Lane, postulated that as a non-human, Superman was not protected by such quaint notions as the Geneva Conventions and that torturing him for information was perfectly alright. Here, he joins the fight between Superman and the New 52 iteration of his classic villain Metallo, apparently renamed Metall-0 in the new continuity.

Steel is one of the most popular supporting characters in Superman's post-Crisis on Infinite Earths canon. He was introduced during the wildly popular Reign of the Supermen story after Superman's death in the early '90s and was featured in his own series for more than four years. After its cancellation he bounced around the DC Universe a bit, appearing in the Superman titles as well as Grant Morrison's JLA, 52 and Infinity Inc. He even appeared (albeit only in a panel, and only as a child) in Darwyn Cooke's award-winning DC: The New Frontier. Most recently the character got his own monthly series back and was featured heavily in The Reign of Doomsday, only to have that series end a few months later with the relaunch of the DC Universe. The character's continuity in the new universe is largely unknown at this time. While it's been stated repeatedly by editorial and creative staff at DC Comics that The Death of Superman storyline happened, the Reign of the Supermen story almost certainly did not, with Steel's first appearance coming in Action Comics years before Superman will have died and Superboy just now coming into his own as a character.