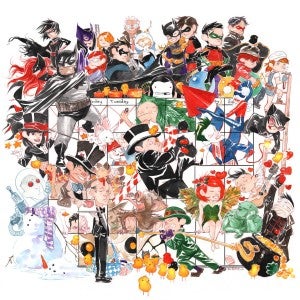 And as you can see from the image at left, that "non-canonical" thing appears to give some leeway to the series that even Smallville hasn't been able to enjoy: both Cassandra Cain and Stephanie Brown appear in the promotional art. Whether they'll actually show up in the series or not remains to be seen, but appearing on the DC blog is about as official as you can get.

“This has been a passion project of mine for some time now, and for anyone that’s followed my work, I’m sure it’s more of an ‘its about time!’ said Nguyen. “The look and style is a slight departure from my usual (think the exact opposite of serious), but the idea has always been the same—to take our favorite existing Gotham characters, place them in fun scenarios without having to be tied to just one continuity or look and feel. It’s basically a Batman book for fans, by two huge fans.”

“At times in various platforms, Batman has been extremely dark and taken very seriously,” added Fridolfs. “So respectfully, we’re going in the opposite direction and having a bit of whimsical fun with a whole city of characters beloved by fans and especially ourselves. Li’l size...big enjoyment.”

Thanksgiving, Christmas and New Year installments will be forthcoming, according to the DC blog and series editor Sarah Gaydos, who said of the series, “Tying each story to that month's holiday gives us a really fun opportunity to play with the themes and traditions of each holiday,” she said. “Dustin and Derek bring something special to each and every page. There are SO many ‘Easter eggs,’ so make sure to keep your eyes peeled!”