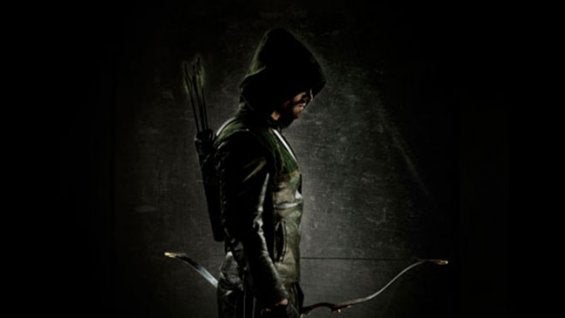 Following the reveal of the new Supergirl costume today, fellow DC Entertainment TV star Stephen Amell took time out not only to comment on Melissa Benoist's suit on Facebook...but to share a funny and coulda-been-harrowing story from his earliest days as Oliver Queen, the Arrow.

You can read the entry on Facebook, and while we usually embed longer comments, this one is actually so long that it would display badly, so if you want to stay here on the site, we've just cut-and-pasted Amell's remarks below:

Just saw the photo of Melissa Benoist as Supergirl on Twitter. Wow. Most importantly - the costume looks awesome. Congratulations to everyone involved. Now... let me take you back and tell you a story.

When Arrow began filming - late winter, 2012 - the very first thing I did after being cast was head for a costume fitting. There was concept art, but the producers had - smartly - left the basics open to interpretation based on who they put in the role.

Several fittings and one defiant, "I'm not wearing army boots, it forces me to run like a business person trying to catch a bus" rant later, we were ready for the exact moment that the Supergirl peeps went through today: The unveiling. And why was this important? Because the year prior a superhero costume picture had leaked and there was a perception - you can debate how accurate it was - that this leak had gotten the production off on the wrong foot.

As a result, any time I was in the suit, I had to wear an overcoat and - I swear to god - a fedora, for fear that paparazzi were lurking about trying to steal our thunder.
Well... the photos were taken and the choice was made. Ironically, the photo we ended up using (me, with my head down in profile) was a shot our director David Nutter insisted on at the last minute just from watching me shift into that stance to stay comfortable.

The photo is examined, approved... given a little panache from the DC team and set for release. I remember everyone being really happy with it and wanting to show it off to people working on the pilot. Which led to one of our producers showing it to Katie Cassidy... She immediately pointed out a glaring problem. The angle of the photo and the placement of my bow made it appear as though I was maybe a little TOO excited about wearing the Arrow suit. She was right. It definitely looked like I had an erection.

Luckily for us... changes were made and the photo erupted online (sorry...) with a fantastic approval rating. We were well on our way.

And that's the story of why first photos in the costume are important / how we ALMOST became the show about the hooded vigilante with a boner.