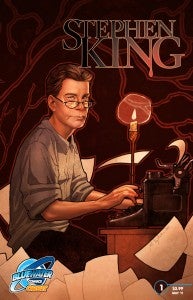 Bluewater Productions, creators of the biography series of comic books that have featured pop culture stars and contemporary figures such as Lady GaGa, Steve Jobs and Mark Zuckerberg, are now setting their sites on the longtime horror author Stephen King.

"Orbit: Stephen King" follows King's career from struggling writer to prolific best-selling author. The book covers a variety of topics, including his writing career, love for the Red Sox, drug and alcohol issues and the horrific accident that almost killed him.

Like most of the Bluewater titles, the content is pieced together via public accounts and available records. With the King comic book, writers Michael Lent and Brian McCarthy pulled together police records as well as King's personal account of the accident.

"What really enlightened us were the similarities we found between Stephen King and Keith Richards of the Rolling Stones. Both came from dirt-poor families. Both had talents that were shepherded by strong, supportive mothers. Both had absent fathers. Each practiced doggedly every day--their talents weren't hobbies, but their salvation. It brought them fame and fortune, it sustained them during their darkest hours of drug addiction and it, literally, gave them both a road to recovery when their lives were nearly cut short in tragic accidents," said co-author Brian McCarthy.