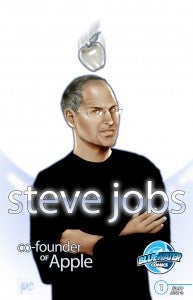 Steve Jobs, co-founder and current CEO of Apple, has been described by many in the tech world as a visionary and a legend. Soon, you can add another description for Jobs: Comic Book Star.

Bluewater Productions, creators of the hugely successful biography comic book collection, plan to add Jobs to their ever-growing list of titles. Previous books have included Lady Gaga, Sarah Palin and Mark Zuckerberg. According to writer CW Cooke, it was the success of the Zuckerberg comic book that inspired the Jobs title:

"There are definitely some similarities between Zuckerberg and Jobs. It takes a certain kind of drive and a certain kind of genius to move society the way they have. The idea behind both efforts is to show the person behind the personality and that it is never what you'd expect."

Similar to the Zuckerberg title, "Steve Jobs: The Co-Founder of Apple" promises to show both the good and bad sides of Jobs. Look for the comic book to hit shelves in August.