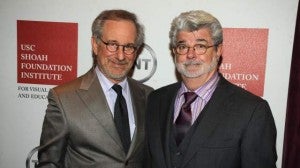 Speaking with Access Hollywood earlier this week, filmmaker Steven Spielberg was reportedly asked whether he was interested in directing Star Wars Episode VII. Spielberg, who directed the Indiana Jones movies for Lucasfilm, has been one of the most widely-rumored directors on Disney's wish list for the sci-fi sequel. For him, though, even a kinship with Lucas isn't enough to bring him to the franchise, as he apparently doesn't think he's a good fit.

"No! No! It’s not my genre, it’s my best friend George’s genre," he told the reporter in question.

While a handful of filmmakers have already said they're not doing, or not interested in doing, the movie for one reason or another, Spielberg is the first of those who seemed to have a serious chance of being considered, given his critical and box office credibility in addition to his long-standing relationship with Lucasfilm.

Still, it's probably not a surprise that one of Lucas's peers would be out of the running. When the filmmaking icon sold his company to Disney in October, he said that he wanted to pass Star Wars along to the next generation of filmmakers.

You know, Jake Kasdan (the son of Lawrence Kasdan, who wrote The Empire Strikes Back and t) is both the literal next generation and a pretty decent director in his own right. Think about it!