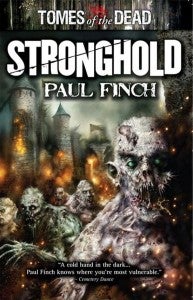 It’s been nearly two years since Variety reported that Rebellion Publishing (parent company of British comic book company 2000 AD) was teaming up with Amber Entertainment to make a movie based on the Stronghold, which is a medieval zombie story. Now, Moviehole.net is reporting that the project is finally moving forward.

With the surging popularity of zombies thanks to AMC’s The Walking Dead TV show, it’s not surprising that Stronghold would start to see new life. In Stronghold, a group of British knights do battle with a bunch of Welsh zombies in medieval Europe.

According to Moviehole.net, Stellan Skarsgard of Thor and Douglas Booth of Noah have been signed to lead roles in the film.  Speranza13media will house the production, while author Paul Finch himself will adapt for the big screen.

Stronghold will reportedly start filming within the next few months with an anticipated 2013 release date. Jason Kingsley is said to be directing, and Ileen Maisel and Lawrence Elman are said to be producing.