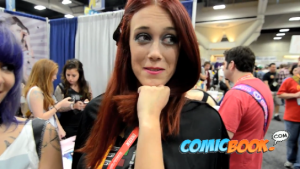 Suicide Girls are really fun to hang out with. A bunch of hot, tattooed, mostly-geek-friendly girls who run their own website and blog, they've also got their own comics and were featured on an episode of CSI.

ComicBook.com ran into a handful of them at San Diego's Comic-Con International and put to them a single, basic question: What do you love about Comic-Con?

"I love Comic-Con because it's just f---ing amazing," gushed Chad Suicide, who was dressed in a a Darth Vader dress and cloak, complete with little helmets in her hair. "There's so much awesome stuff going on, and literally my mind is blown."

"This is the only place I can come where I'm not excommunicated for being so ridiculously excited about comic book and video game releases," said Venom Suicide.

Finally, Acne Suicide ended the conversation on a sweet note: "My favorite thing about Comic-Con is hanging out with my best friends," she said.