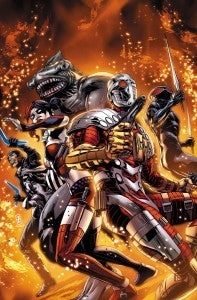 Matt Kindt's Suicide Squad run will not only end in April, as he had previously announced--but so will the title itself. It's a move reminiscent of Kyle Higgins saying that he wouldn't be part of the creative team for Nightwing post-Forever Evil, and while it's technically true, the new writer--Sean Ryan--will get just one issue to wrap things up before the book is over (also just like Nightwing, which today the publisher announced will end in April). What will happen to the characters is anyone's guess, although it seems likely that Kindt will continue to use at least some of them in Justice League United, which has already teased dealing with some of the A.R.G.U.S. fallout from Forever Evil and the end of the Justice League of America. Five other DC titles will end in April, including three previously announced (Teen Titans, Stormwatch and Justice League of America) and a pair of surprises announced today with the first round of DC's solicitations, Superman Unchained and Nightwing. Dick Grayson, the lead character of Nightwing, is just one of the New Teen Titans to get a major status quo change in April; Wally West will be introduced for the first time in the New 52, while the existing team of Titans folds in an issue featuring the return of Beast Boy. Meanwhile, over in Wonder Woman, the Amazons are back...and we can't help but wonder whether that might lead to Donna Troy turning up down the road. You can check out the solicitation text for Suicide Squad below and the cover above. SUICIDE SQUAD #30 Written by SEAN RYAN Art by IG GUARA and RUY JOSE Cover by PATRICK ZIRCHER On sale APRIL 9 • 40 pg, FC, $3.99 US • RATED T+ • FINAL ISSUE In the ashes of FOREVER EVIL, A.R.G.U.S. and Task Force X leader Amanda Waller must face the consequences of her failure to protect the United States from the Crime Syndicate.

Suicide Squad to End in April