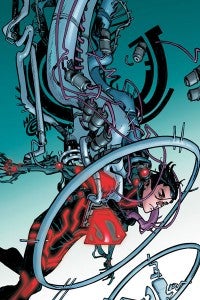 So far, DC is two for two when it comes to taking Superman and his supporting characters in bold new directions without them coming across as gimmicky or derivative. Last week's Action Comics took off with a Superman who seemed to be in the same spot as Batman over the years, at odds with the authorities in pursuit of true justice for those affected by corruption and crime. This week, Superboy #1 flies off the shelves, and I have to honestly say that it is one of the more complex and knotty comic books I've read in awhile. I was amazed as I kept reading at how many layers this book was willing to explore in its first issue, as one mystery soon gave way to another and then another. This Superboy is one that has the potential to be an interesting look at the nature of science and experimentation, especially where genetics and the boundaries of science are concerned, all within the context of the making of a hero.

What starts out as Superboy's commentary from inside of a stasis container about his status quickly becomes a story of perception versus reality. Surrounded by scientists, security and other authority figures, Superboy exists in a world that thinks he is a non-functioning human/alien hybrid, but as his complex and deep thoughts tell us, that is definitely not the case. Just as he is about to be terminated, despite the protests of one woman that he refers to as "red", he is unleashed, and a bloody scene follows. What follows next is Superboy adjusting to normal life at a normal school with normal people around him, but he experiences not so normal reactions to life around him. This leads to ANOTHER layer of the story, which takes us back to the lab where Superboy has his origin. Red continues to feel attachment to this creation, one that she has had many a hunch about in his early development, and he definitely feels her presence, but the question hovers in the air as to just what is real in this case.

The mystery as to just how much of a human Superboy is versus alien gets explored in a series of virtual reality models that the reader questions as they unfold. The book does a great job of warping out perceptions of what's really happening and just what reality are we being exposed to at any given moment. It paints a good picture of what Superboy must be experiencing in this day to day existence. Reality does tell us that Superboy's world is not what it seems, and it's about to get a lot more confusing as he is being prepped as an instrument of destruction for a powerful figure with some superpowered problems of the teenage set. Scott Lobdell makes this first issue a stunning debut that sets up the book to be easily one of the most intriguing of the new DCU. Superboy can write his own ticket and have his own destiny in this case. It's safe to say that this book's second issue will CERTAINLY end up on my "must-read" pile next month! Grade: A+