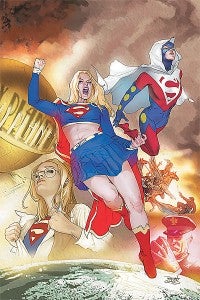 DC's Supergirl has seen quite a resurgence over the past several months, due in no small part to new writing talent and a creative direction that has made much use of the New Krypton storyline and the interesting addition of the ever-emerging and intriguing character of Superwoman. With this forward momentum present, DC released this week the first annual of Supergirl. With it, two key stories are presented, one being the origin and development of Superwoman and the other focusing on Supergirl's new secret identity as Linda Lang. While there are two distinct stories here, only one emerges as a clear and distinct narrative. Supergirl's story "Secret Identities" follows in the recent development of having Kryptonians banned from Earth, as per a United Nations mandate. A hostage situation brings Supergirl out of a form of hiding into the fray in order to save the innocents. Disguised now as Linda Lang in this situation, Supergirl leads us through a narrative that feels strangely convenient in terms of its resolution. As the souped-up investigators look for the Kryptonian responsible for disarming the criminals, red herrings abound, with several narrative stops devoted to making us wonder if Linda is the only one in crowd with powers. The resolution of Linda's predicament feels very rote and too neatly packaged, the suspense of if she will be caught or not deflated all too quickly. On the flipside to this is the well-paced and interesting story focusing on the origin of Superwoman, now known to all as Lucy Lane, younger sister of Lois. While both characters serve as chief narrators for their own respective stories in this issue, Lucy's comes across as more introspective and purposeful. She spins a tale of never feeling good enough in the eyes of, chiefly, her father, and she finds herself living in ways that will hopefully force him to pay attention to her. After the events surrounding New Krypton and her role in the death of Agent Liberty, this origin tale, and more importantly the depth of impact her father had on her, makes her time as Superwoman that much more intriguing, as her father's approval is what seemed to help lead her into direct conflict with Supergirl and a branding as a villain in the process. Lucy's story works better in this case because the character is allowed to simply be, rather than to seem.