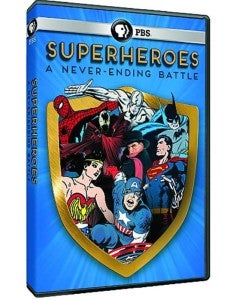 received an advance copy of the Superheroes: A Never-Ending Battle documentary, which will be airing on PBS on Tuesday, October 15, 2013. If you’re a comic book fan, then you should consider this documentary to be must viewing.

While many of the stories told will be familiar to most comic book fans, the documentary is expertly crafted in a way that captivatingly tells the history of superheroes. From the first emergence of superheroes in the thirties to their presence as the box office champions of today, Superheroes: A Never-Ending Battle fills in all the sometimes tumultuous details of the journey.

The documentary is broken into three parts, each covering a specific time period as related to superheroes. Part One “Truth, Justice, and the American Way” spans from 1938 to 1958, covering the creation of superheroes in the depression, the government scrutiny of comics in the fifties, and Superman’s emergence on television.

Part Three “A Hero Can Be Anyone” spans from 1978 to present, covering the historic first Superman movie, superheroes rising popularity in video games and movies, and the emergence of digital comics.

While younger viewers will likely be drawn to Part 3, which focuses on the modern movies, it’s the historical significance of the first two parts that will likely appeal to older viewers. Filmmakers Michael Kantor and Laurence Maslon actually started work on the documentary back in 2009, which means they were able to capture interviews with several comic creators who sadly are no longer with us today.

In Part One, seeing comic book legends like Joe Kubert, Carmine Infantino, and Joe Simon again is priceless viewing for any comic book fan. But in addition to getting to see legends that are no longer with us, Superheroes: A Never-Ending Battle is also filled with entertaining snippets from the legends that are still around like Stan Lee, from popular sixties and seventies TV actors, and from rising stars like Geoff Johns.

It's these interviews that are mixed in with the historical lessons, which elevates Superheroes: A Never-Ending Battle from being a simple historical documentary to being an entertaining and exciting story. But instead of merely writing about how fascinating these interviews are, we've included a couple quotes below to give you a taste of what to expect in Superheroes: A Never-Ending Battle.

In regards to the Batman TV show, Adam West explains, “In the late sixties there were the three B’s: The Beatles, Bond, and Batman. It was a tribute to the comic book, and the comic book sales increased exponentially when we came out.”

In regards to Superman the Movie, Geoff Johns says, “That was the first movie that took it seriously, and that made it more than just a superhero film, more that a campy take on a superhero, it made it believable. And it gave it again heart and weight. And I think it influenced everybody since then. I think it still does.”

In regards to digital comics, Todd McFarlane says, “It’s just a delivery mechanism. People keep going, ‘Is it going to be the ruination of comic books?’ That depends on your definition. Here’s my definition of comic books: words and pictures. Do I believe that words and pictures are going away? Never, they’ve been there since the scrawlings on the caves in prehistoric times. The only thing that has changed is the delivery mechanism. So whether it’s now on a computer or pad or on paper, what do I care?”

Superheroes: A Never-Ending Battle Is An Entertaining, Comprehensive, Must-See Documentary