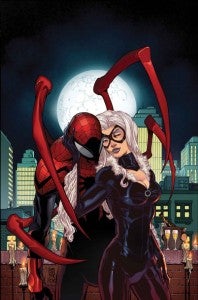 writer Dan Slott, who has been working on the character for long enough now to be considered something of an authority, is promising developments coming up in October's Superior Spider-Man #20 that will change the title for the foreseeable future.

The issue, pictured at right, is solicited as follows:

From the fallout of NECESSARY EVIL, comes new beginnings and new twists that will be felt in the pages of Spider-Man for years to come! SUPERIOR SPIDER-MAN #20 is where it all starts! Do NOT miss this one! It’s the first ever adventure for the Superior Spider-Man and the Black Cat. Felicia Hardy always cared for the Spider more than the man. But what happens when that man is Otto Octavius? Plus: A day Otto has been waiting for is finally here. Is the world ready for “Dr. Peter Parker”… and what he plans to do next?