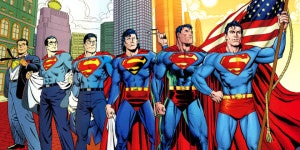 It began with Bruce Timm approaching Zack Snyder about the possibility of doing a short for the Cartoon Network DC Nation short--and when Snyder pitched the idea of beginning with the Siegel and Shuster Superman and morphing gradually into Henry Cavill, they realized that all of the things that had to be included would have been too long to do as a one-minute short. So Warner Bros. Animation started to look at how it might happen, and what form it could take. "What has to be in here? What points do we have to touch?" legendary Warner Bros. animator Timm said, adding that there were a lot of things he'd like to have added that he couldn't make happen. The short features animated takes on the Siegel & Shuster Superman, the classic Fleischer animated shorts, the live-action George Reeves and Christopher Reeve Superman portrayals and comic book artists like Neal Adams, John Byrne, Dan Jurgens and Jim Lee. Specific storylines that appear in the short include Superman's classic '70s boxing match with Muhammad Ali, the Death of Superman and the Superman Red/Superman Blue storyline from the '90s, as well as a glimpse at the New 52. "When they first showed me this, I got choked up because I was watching my life flashing before my eyes," longtime Superman editor Mike Carlin said, noting that he was a fan when the 25th anniversary happened and was working in DC Editorial when the 50th anniversary was published. He encouraged DC Co-Publisher Dan DiDio to carry on the tradition of the silver and gold "statue covers" by doing a 75th anniversary cover before the end of the year. The animated short will be available on the forthcoming Man of Steel Blu-ray Combo Pack, due in stores November 12.