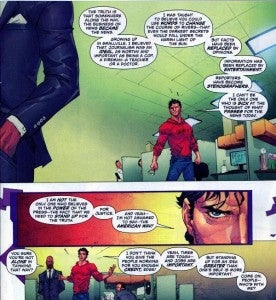 In today's Superman #13, by former Red Hood and the Outlaws creative team Scott Lobdell and Kenneth Rocafort, the Man of Steel has a moment of clarity that leads him--in his disguise as Clark Kent--to quit his job at the Daily Planet in grand fashion, delivering an impassioned speech to his co-workers as he does so and bringing Cat Grant, the Planet's entertainment writer and sometime romantic distraction for Clark, along with him. It's a scene that's been compared (even before it was seen, going back to Monday when it was announced) to Jerry Maguire's resignation in Cameron Crowe's Oscar-winning movie, and that's the headline under which Bleeding Cool scanned the scene and ran it this morning. And there's a bit of that, but also a bit of Journalism 101 going on in the scene, which sees Clark complaining that taking chances is verboten and reporters are basically just glorified stenographers for the newsmakers. It's certainly got some truth to it; even (perhaps especially) in the entertainment media, reporters are routinely denied access to sources of information if it's perceived that their stories aren't coming out "positive" or "on-message" enough. And that's a tough pill to swallow for somebody who still sees journalism as "The Fourth Estate," a check on government which has the responsibility of keeping the powerful honest. That's, of course, why Superman always wanted to be a reporter and it's something that has some promise in being explored. Why would someone who could easily have become the most famous quarterback in the history of the NFL choose to take a job with a $13,000 a year starting salary? It's because Clark believes what many Americans once believed: that being a journalist is a job that can make a difference in the world. Increasingly, that attitude is mocked by the general public and discouraged in the newsroom, with the position often taken that if you're changing the world, you're not "unbiased" enough. That's connected to a whole other battery of problems in terms of what exactly constitutes bias. Fringe groups routinely harangue the media, demanding that their viewpoint be given equal time with those that have achieved consensus in the marketplace of ideas. There's an ongoing discussion within journalism about whether that's a good or bad thing, since to give them what they want inevitably frames the issue in a way that leads the common viewer to understand there's a controversy where, in some cases, there isn't one. On the other hand, ignoring those viewpoints can lead viewers to conclude there's consensus where none exists, and marginalizing or mocking their viewpoints almost inevitably leads to radicalization of those community members who can go back to their constituents and say, basically, "See how put-upon we are?". In the post-Crisis on Infinite Earths continuity, both Lois Lane and Clark Kent were referred to as Pulitzer Prize-winning journalists. If memory serves, at least one of them won that prestigious award (and the substantial cash and professional credibility that comes with it) as a result of investigative journalism, which is for all intents and purposes not only a dying art, but a dead one, at most major metropolitan newspapers. There are entire books dedicated to the year's best investigative journalism that can't find a home at major news outlets, or that after being purchased gets shunted to page D26 next to the second half of a story on "baby powder's other uses." Serious investigative work takes time and money, neither of which are all that prevalent in print journalism these days, so more and more you're expected to do more with less. Investigative journalists like the ones I've worked with in the past increasingly find themselves doing their work essentially for no money up front and then finding someone who wants the "scoop" once it's assembled--which is probably not an option for Clark Kent, who's been depicted in the New 52 as living fairly hand-to-mouth. It also ruffles all the wrong feathers for corporate journalism; few publishers want to publish a story that costs a lot of time and money to put together and, once assembled, takes aim at a potential advertiser, or at someone who can then cut you off from information in the future. Whether it's politics, entertainment or even local news, there's always someone who's willing to say, "That story burned your bridges here." Not many years ago, I had an A-list comics writer who contacted my boss's boss (at another site) to complain that I had given his work too many bad reviews. I was discouraged from covering that person's work for an indeterminate period of time, effectively shutting me off from a lot of news because the writer in question was (and is) quite prolific. And I'm confident that if I named the writer here, years later, it would still present a barrier to access for future stories. But that sounds like it's what Clark wants to do next--the kind of story that can change the world, or at least someone's perspective on it. Lobdell has compared Clark's ambitions to those of Arianna Huffington or Matt Drudge, which is an interesting statement in the face of a dramatically more "political" take on Superman over in Action Comics. The John Steinbeck/Bruce Springsteen/friend-of-the-working-man Superman seen in Grant Morrison's run certainly lends itself to taking on the role of a champion of social justice in print--but if that happens, what will the fans (or, in a case of life imitating art, DC's advertisers) think?