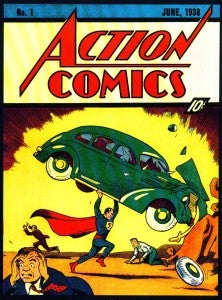 Laura Siegel Larson, the daughter of Superman co-creator Jerry Siegel, released a letter to the media over the weekend that vilifies Warner Brothers and DC Entertainment, claiming that they have been engaged in questionable ethical behavior throughout the nearly 15-year lawsuit with her family, and especially since 2008 when Warner was handed a significant loss and ordered to pay royalties to the Siegels dating back to 1999.

Marc Toberoff, the family's attorney, has been accused of his own shady behavior and has been sued separately by DC for unfair competition, alleging that he interfered with a settlement agreement they were pursuing with his clients for personal gain. Toberoff is one of a number of larger-than-life characters associated with the case, but has become a lightning rod in recent years as Warner have claimed that he's pursuing a third-party agenda that's drawing out a case that could be settled with a different lawyer.

Larson rejects this version of events, saying that "Marc Toberoff has stood by us through thick and thin and we stand by him. We love and respect Marc who has poured his heart and soul into helping us obtain justice in court, tenaciously litigating on our behalf against the legions of highly paid corporate lawyers that Warner Bros. has at its disposal."

You can see the full letter below.

My father, Jerry Siegel, co-created Superman as the "champion of the oppressed … sworn to devote his existence to helping those in need!" But sadly his dying wish, for his family to regain his rightful share of Superman, has become a cautionary tale for writers and artists everywhere.

My family's David and Goliath struggle against Warner Bros., the media conglomerate, goes back to April 1997, when my mom and I exercised our clear right under the Copyright Act to achieve my dad's dream of recovering his copyrights. In April 1999, my dad's half of the original Superman rights reverted to us, entitling our family to a significant share of Superman profits, which Warner DC Comics refused to pay. For over thirteen years they have fought us at every tum, in and out of court, aiming to make recovery of the money they owe us so impossibly difficult that we would give up and settle for peanuts.

We refused to be intimidated despite my elderly mom's heart condition and my multiple sclerosis. In 2008 the U.S. District Court ruled that my mom and I had successfully recaptured my father's Superman copyrights and were entitled to Superman profits since April 1999.

Angered and alarmed by this defeat, Warner Bros. resorted to a despicable old trick: diverting attention from the legal merits of our case by personally attacking our long-time lawyer, Marc Toberoff. Through DC, the media giant filed a lawsuit against Mr. Toberoff, my family and the Estate of Superman's co-creator Joe Shuster, falsely claiming "unfair competition" and that Toberoff interfered with an out of court offer that Warner tried to push on my mom and me in early 2002 – an offer full of studio accounting traps that we refused to sign before we even knew Mr. Toberoff!

Warner Bros. possesses documents stolen from my attorney's office which mysteriously ended up on the desks of three top Warner executives. Warner claims it has no evidence whatsoever as to when these large packages arrived. According to Warner, the thief also included a cowardly anonymous letter that vilifies our attorney and mischaracterizes the privileged attorney-client communications enclosed. In a disgraceful violation of my privacy, Warner's lawyers attached this nasty anonymous letter to a publicly filed complaint and leaked it to the media.

In the midst of this sideshow, my mom, the original model for Lois Lane, passed away last year at 93, still determined to keep her promise to my dad. She never got to relax and enjoy any proceeds from the crusade she fought until her dying day.

Now the torch is in my hands and I won't be silent any longer about Warner Bros.' tactics. I refuse to be bullied or deterred from enforcing my family's rights, and fully support my attorney who has tirelessly defended them. Warner Bros.' smear campaign has only made me more determined than ever. We have the right to the attorney of our choice, which is none of Warner's business. Marc Toberoff has stood by us through thick and thin and we stand by him. We love and respect Marc who has poured his heart and soul into helping us obtain justice in court, tenaciously litigating on our behalf against the legions of highly paid corporate lawyers that Warner Bros. has at its disposal. [t was Marc's dedication and skill that brought us victory in federal court, which Warner Bros. desperately hopes to derail with its vindictive and baseless lawsuit. Make no mistake, Warner Bros. is attacking our attorney to attack us and for no other reason.

Warner has spent about $35 million dollars on corporate lawyers to fight my family and the Shusters instead of investing in a fair settlement. The very attorneys who are lining their pockets with millions in fees accuse my attorney of profiteering when, in fact, Marc has not received one cent since he filed the first Superman case for us in 2004, and has advanced enormous sums out of his own pocket on our behalf. Unlike Warner's highly paid attorneys, Marc Toberoff will not be compensated unless and until we prevail. He works under an attorney's contingency fee agreement. The notion advanced by Warner that he is trying to own or control Superman is ridiculous.

Fighting for what's right has not been easy. No one would want to endure what Warner Bros. and DC Comics has put my family, the Shusters and my attorney through. And that's exactly what their executives and lawyers want. By filing frivolous lawsuits against my family, the Shuster family and our lawyer, by publicly revealing my private communications, by driving up litigation costs and refusing to negotiate fairly, these companies think that other creators will be afraid to stand up to them, and that lawyers will think twice before taking on their cases.

What Warner Bros. apparently doesn't realize is that despite their tremendous power, I will NEVER give up on my parents' dream of rightfully restoring my father's rights to his family.

Would Superman, the embodiment of "truth, justice and the American way," let Warner Bros., DC Comics, and their gang of attorneys get away with this? Not for an instant!