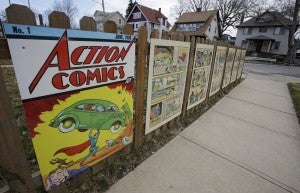 To commemorate the 75th anniversary of Superman's first published appearance, the city of Cleveland, Ohio (from where Jerry Siegel and Joe Shuster hailed when they created the character) declared today to be Superman Day, and is flying a Superman flag (which we assume is like a cape, except with the "S" on sideways) over their city hall.

"We're here to honor Superman on his 75th birthday. He was created right here in the Glenville section of Cleveland," said Mayor Frank Jackson in a speech before a group of Superman fans. "He lived a good life, and he still looks good."

Tower City and the Terminal Tower be lit red, blue and yellow, and the city is passing out Superman cupcakes at the Superman welcoming center at Cleveland Hopkins International Airport.

"He loved the movie theaters, the tall buildings, the trolleys and he loved going to the library," said Laura Siegel Larson of her father, who wrote Action Comics #1's Superman feature. "He had no money, but here was a place he could spend endless hours reading books on science fiction, detective stories and anything else he could get his hands on, and do it for free."

A few years ago, author and TV personality Brad Meltzer helped fund an effort to repair, preserve and acknowledge the Siegel home, where the creation of Superman happened. In his novel The Book of Lies, Meltzer built a mystery around the death of Siegel's father, who was reportedly shot to death shortly before the creation of Superman. The house had fallen into disrepair and had never been marked with any recognition of its historical relevance. Joe Shuster's house had already been demolished. Brian K. Vaughan's brilliant Dark Horse miniseries The Escapists also dealt with the identity of Cleveland as home to some hugely relevant comic book creators, including Siegel and Shuster as well as Harvey Pekar and others.