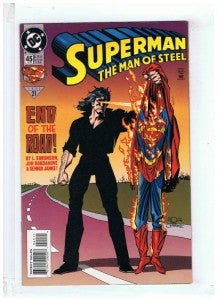 Stop now if you don't want to be spoiled, but DC Entertainment has given USA Today the scoop on Superman #13, out this week, and the most surprising development in Clark Kent's personal life since they dissolved his marriage with Lois Lane.

And, yes, we've chosen a headline and a teaser image that makes it somewhat less clear what the story's about, mostly to prevent the old "spoilers in the headline" problem. 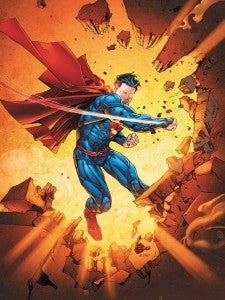 In today's issue, Clark Kent's long-simmering frustration with The Daily Planet management and Galaxy Communications finally comes to a head when he goes the full Jerry Maguire, delivers a monologue on the meaning of journalism, and leaves the major metropolitan newspaper that he's called home for decades.

"This is really what happens when a 27-year-old guy is behind a desk and he has to take instruction from a larger conglomerate with concerns that aren't really his own," series writer Scott Lobdell told USA Today. "Superman is arguably the most powerful person on the planet, but how long can he sit at his desk with someone breathing down his neck and treating him like the least important person in the world?"

He added, "I don't think he's going to be filling put an application anywhere," the writer says. "He is more likely to start the next Huffington Post or the next Drudge Report than he is to go find someone else to get assignments or draw a paycheck from."

The issue will reportedly see Clark not only storm out, but call on others to do so as well, citing Superman's credo of "truth, justice and the American way" as something they must stand up for.

While the writer hinted that they won't be working at a Metropolis-based media venture, Clark manages to convince Cat Grant to join him in his storm-out, and she'll join Clark in his next professional venture. Lobdell also explained that he has considered one of those long-standing debates that people in the comics community have had--that reporting on Superman while keeping Clark Kent's secret, has put Clark Kent (and sometimes others) in a tough spot. That conflict of interest, but his commitment to reporting in the face of it, has landed the character on lists of both the best and worst reporters in the history of comics, or indeed fiction in general.

He also hints that he has plans for the character and the title that go far beyond the six-month runs that George Perez, Keith Giffen and Dan Jurgens were given.

"Rather than Clark be this clownish suit that Superman puts on, we're going to really see Clark come into his own in the next few years as far as being a guy who takes to the Internet and to the airwaves and starts speaking an unvarnished truth," Lobdell said. He added that he and Rocafort wanted to create a perception that Superman and Clark Kent  "both have a lot of gravity but are also very light and young and sexy."