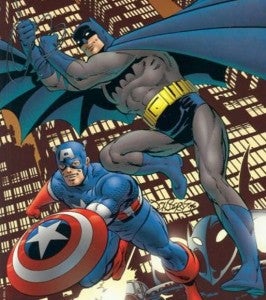 Costumed superheroes made headlines over the weekend. Or at least people dressed up like costumed superheroes did. Jennifer Wenger, who is a Wonder Woman impersonator, was attacked by a transient while filming an outside segment for the Jimmy Kimmel show. Luckily, Christopher Dennis, who is a Superman impersonator, came to her aid and helped to block the transient’s attack on Wonder Woman.

Meanwhile, John Buckland, dressed as Batman, and Troy Marcum, dressed as Captain America, rushed to a house that was on fire. They kicked in a door and broke out a window to allow the smoke inside to escape, and Buckland crawled inside to rescue a cat.

Buckland and Marcum were dressed as superheroes to represent an organization called Heroes 4 Higher, which brings positive motivational messages to children. Check out the videos below for the full stories.