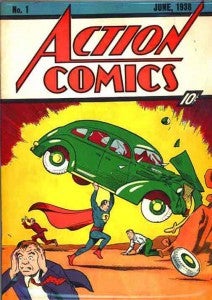 Fish gotta swim, bird's gotta fly, Siegel and Shuster will be suing DC Comics 'til the day they die.

The Joe Shuster Estate has asked a court to reject Warner Brothers' request for summary judgment in the Superman copyright case, saying that a 1992 deal signed by the family following Shuster's death effectively nullifies their claim. The deal reportedly promised never again to pursue the Superman copyright in exchange for $600,000 in cash, payment of Shuster's debts and an annual pension for his sister.

The deal had been key to a tentative summary judgment issued recently by  U.S. District Judge Otis Wright that would have given the case to Warner Brothers, who own DC Entertainment. Wright oversaw the hearing with the Shusters, as well.

“We have an agreement, promises made that we will never again pursue any future interest in Superman, promises repeated over and over again,” said Judge Wright in response to the request according to Law 360.

“I submit that it’s impossible for this document to be the basis for Warner Bros. and DC’s chain of title to a billion-dollar property,” Shuster and Siegel attorney Marc Toberoff said. “When they want someone to assign a copyright, they have an agreement this thick, and that agreement is filed with the Copyright Office to give the world constructive notice.”

His position seems to be that in order for the 1992 document to be the final word, one would have to assume that it reassigns the copyright in a permanent way, effectiveliy nullifying previous copyright filings and the rights that the Siegel and Shuster Estates can exercise their right to.

Due to changes in copyright law since the creation of Superman, the original life of the copyright (which should have lapsed by now, returning the character to the public domain) allowed for the original creators to file for restoration of the copyright they had signed away to DC. The Siegel and Shuster Estates filed a copyright termination notice intended to serve that purpose in 2003.

The pair have been intermittently engaged in legal action for decades now, with the most notable landmarks in the process being a settlement between the parties just prior to the release of Superman: The Movie in the 1970s and the 1992 deal being referenced above. Litigation with the Siegels took an unexpected turn in 2009 when they regained partial control of the rights, something that Warners is seeking to overturn via appeal.