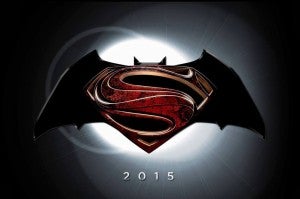 EDIT: This is NOT an official release, but was created by a fan on DeviantArt; you can see the original here.Original story:

After a low-resolution version made its way online this weekend, Warner Bros. have released an official look at the teaser image for the sequel to Man of Steel, expected to be called either Superman Vs. Batman or Batman Vs. Superman.

The film, scheduled for release in summer 2015, will be competing against Avengers: Age of Ultron to be the biggest comic movie of that year. It will star Henry Cavill, Amy Adams, Laurence Fishburne and Diane Lane, reprising their roles from Man of Steel. Little else is known about the film, except that it will reportedly pick up on threads left by the violent and controversial ending to the previous movie.

Thanks to Super Podcasto Magnifico! for the spot.