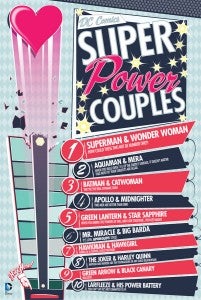 In all the media hubbub that DC Entertainment has been doing their best to stir up around the plot point of Superman and Wonder Woman's on-the-page romance, one of the things that's become glaringly obvious is what their priorities are.

How do I mean? The publisher recently released a list of their top ten "super couples," published as a graphic on their blog, The Source and shown here at right.

My first reaction: "Where the heck are Ralph and Sue Dibny?" Sure, they haven't made an appearance since the New 52 relaunch, but many of these "couples" aren't couples anymore in the world of the New 52 either and so clearly that's only qualification for inclusion if it's convenient because your existence or relationship doesn't particularly fit DC's publishing agenda du jour. And while it would be difficult to argue any one particular couple as more "important" than any other, especially when the other side of the argument is the publisher of the characters in question, the fact that they ran out of inspired ideas by the bottom of the list and included Larfleeze (the greedy orange lantern) and his power battery tends to kick out any, "Well, we just ran out of space" responses.

You might say, "Well, Ralph and Sue Dibny aren't both super, per se." That's true--or at least was before both of them died and reappeared at the end of 52 as ghost detectives. So, sure...they don't count. Ditto Lois & Clark, or Barry Allen and Iris West, or any number of other responses that immediately spring to mind when you think of the relationships that heroes end up in. Since it was a long-standing trope of the genre that the hero's love interest was little more than someone to be rescued, most of DC's longest-standing heroes don't exactly stay in healthy, committed long-term relationships with anyone who can reasonably be considered their peer. That is, if we're being honest, one of the great things about Lois (take away Superman's powers and he doesn't go three rounds with her in the boxing ring), but just being a bad-ass doesn't inherently make you Justice League material.

In any case, who were some of the couples that I'd have liked to see on a list like this? Check 'em out below, and let us know which ones we might have forgotten!

Once again, you've got a problem in that Stephanie Brown is notoriously absent from the world of the New 52, but so have been Mister Miracle and Big Barda, yet Mr. and Mrs. Scott Free make the list over Green Arrow and Black Canary, who will soon have pretty broad mainstream awareness thanks to The CW's Arrow. And while the events of Wonder Woman #12 make it seem likely that those two will be seen again soon, if rumors (based on pretty strong evidence) are true, Spoiler will be back in action in the near future, too.

There will be those who would like to see Nightwing and Batgirl on this list, particularly because there has been some implication between the lines that they either are, were or will be together in the New 52. They've also got a history of unconsummated flirtation that goes back at least as far as the old Batman TV series with Adam West and Burt Ward. Still, I'm a fan of the classics and would prefer to see...

If there's ever been anything between them in this new world, we don't yet know--but she's definitely spent some time with the team formerly known as the New Teen Titans, per Red Hood and the Outlaws #1. And given what a huge part of their characters the relationship was, for such a sustained period of time, it's hard to ignore it just because it hasn't been specifically laid out yet.

One of the few super-couples to actually get any kind of a groove on during the New 52, Booster Gold and Godiva might be a bit under the radar because she's not exactly A-list material...but given the importance of the woman Booster eventually ends up with, it seems like she's worth paying attention to even if she ends up playing the "Aunt Robin" role in Booster Gold's personal version of How I Met Your Mother.

Yeah, yeah. We said no damsels in distress or puny mortals or whatever you want to call them. But in the case of the New 52, he's leading the Justice League of America. Not exactly a lightweight.

Oh, yeah, and it's someone she might actually end up with!