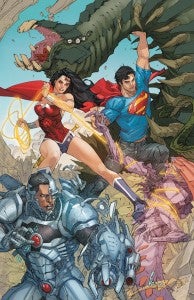 Fans have already seen a first-look image of Superman as he'll appear in Action Comics once Rags Morales has finished and artist Tony Daniel takes over the book. A new era, a new costume, all that... ...but now, the cover of Superman #16, due out in January from Scott Lobdell and Kenneth Rocafort, appears to show a Superman who has lost or given up his costume altogether and returned to the t-shirt and jeans look of the first few issues of Morrison's Action Comics. The solicitation text for the issue gives no clue as to why this might be the case, although since it's in the middle of the H'El on Earth crossover, which sees Superman facing off against a Kryptonian menace who is trying to take over the Fortress of Solitude and then the world, perhaps it has to do with the suit's Kryptonian features being disabled by someone with more experience in such matters. From New Krypton to the New 52, Superman has been seen wearing quite a number of different costumes in the last three years or so. What's been your favorite?