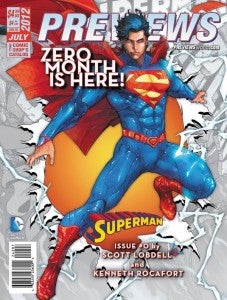 With Dan Jurgens and Jesus Merino leaving Superman after #12 hits the stands and new artist Kenneth Rocafort taking over art chores on the title, fans were excited to see the new take on the Man of Steel when the new solicitations hit on Monday.

Of course, the cover we were given featured Jor-El instead, leaving fans to guess at what Rocafort's Superman might look like--but not for long. A different cover to Superman #0, also by Rocafort, appears on the cover of this month's Previews magazine and made its way online last night.

Maintaining the same trade dress as the rest of the zero issues we've seen so far, the image features Superman--as drawn by Rocafort--bursting through a black-and-white version of the cover to the series' #1 issue from last year.

While a number of New 52 titles have had creative shifts since the line launched, Superman stands alone among the top tier of heroes in not only having changed creative teams completely, but having done it twice now.

Check back with ComicBook.com for more conversation with outgoing co-writer/artist Dan Jurgens when this month's Superman #10 comes out in a couple of weeks.