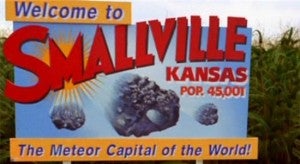 Have you ever wanted to visit Smallville, the childhood hometown of Superman? If so, then you soon might be able to get your wish, as a new Facebook campaign hopes to create a real Smallville. In both the comic books and the TV series, Smallville was located in Kansas. Despite the fact that Metropolis, Illinois has built a robust tourism business by laying claim to being the hometown of the adult Superman, no Kansas town has ever done the same by laying claim to the Smallville name. However, an artist named Christopher Wietrick looks to rectify that situation. Wietrick has launched a Facebook campaign to get his hometown of Hutchinson, Kansas officially renamed to Smallville, Kansas. Wietrick is working on a comic book to support the name change, which will be used to help raise money for the Boys and Girls Club of Hutchinson.

The Hutchinson, Kansas Should Be Named Smallville Facebook page

lists several reasons in support of the idea. At 42,000 residents, Hutchinson has a similar population to Smallville, which was said to have 45,001 residents on the TV show. Smallville was said to be 55 miles from Salina, Kansas, and Hutchinson is actually 57 miles from Salina, Kansas. Smallville was known for having meteor showers, and so is Hutchinson, Kansas. Beyond just the similarities, there are a number of other reasons that the name change might make sense for Hutchinson. Two of Hutchinson's biggest tourist attractions are a Cosmosphere and an Underground Salt Museum (which contains a Superman costume). Just image how many more tourists those venues would attract if the town were officially tied into Superman. Wietrick has started to attract lots of local news attention in his quest, including this piece on KWCH. And if all this wasn't enough to convince the townspeople to go forward with a name change, the town of Hutchinson is apparently even shaped like Superman's logo.

Superman’s Smallville Hometown Could Become Real Thanks To Facebook Campaign