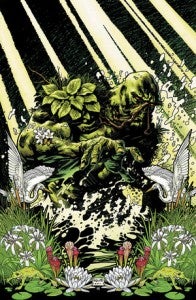 One very good thing that I'm realizing as I'm reading all 52 of DC's new number ones is the chance to read some books and characters that I typically wouldn't have picked up to read as a fan. As a writer here, I'm constantly seeing and reading things that stretch my mind and my list of books that might someday make it from the "strictly work" pile to the "fan pile." Let's take another one of this week's number ones, Swamp Thing in this instance. The strange and slightly mysterious DC character has seen several treatments over the years, with Alan Moore's run on the character one of the more famous ones. This time, Swamp Thing is back as part of the new 52, and this premiere issue kicks off the story of Dr. Alec Holland, botanist and creator of a special formula that could grow vegetation virtually anywhere. Let's dig further to see how this one scores on our grade scale and if this will be a book that moves from that work pile into the personal one!

One of the more intriguing things about this premiere issue is the level of care that writer Scott Snyder takes to make sure that the scientific details of Dr. Holland's view of the world as a botanist is accurate, and there are some interesting tidbits and facts about plant life learned along the way. A series of mysterious deaths of various species around the country raises red flags amongst some of DC's biggest heroes, and Superman goes out in search of assistance from Dr. Holland, who is now trying to hide from the world after a strange incident in which he died and then returned under mysterious circumstances. Superman and Holland get into an interesting exchange about Holland's work with the formula and the nature of plants in general, but some parts of the story feel slow to build and develop. It reminded me a bit of the old tv show The Incredible Hulk, where a man with a secret and a powerful gift seeks only to be left alone to sort out his place amongst things. These parts of the story, and Holland's view of the world through a botanist's eye, work as a whole. A subplot, while necessary to most comic books to establish some upcoming major plot thread that involves that subplot, begins here involving animal bones coming back to life and some bizarre flies that do horrific things to humans. While it will obviously become important later, it didn't seem to mesh well with the main story of Dr. Holland and his struggle with his formula and the memories of a "swamp thing".

As a whole the issue felt effective at establishing it's purpose, but it didn't feel particularly engaging as it relates to narrative. I felt that I had just read a very interesting scientific article as opposed to a story of a man with a haunted and troubled past. Yanick Paquette's illustrations are interesting and make clever use of the plant idea when it comes to separating some of the panels on various pages, but I left this issue with a bit of disappointment. Part of that could have been because I had just read the fantastic Animal Man #1 and was feeling a bit like this issue riffed on that book just a bit in the dead animals department with not nearly as much nuance and subtle fear. This will definitely be a book that will find its legs and establish itself in a stronger fashion, and I would be curious to see what issue two does with the character and how he confronts the big green creature that shows up at the end of the issue. So far, it's wait and see with this one. Grade: B-