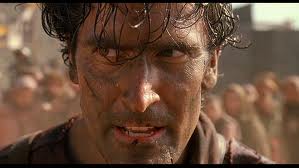 No, folks, there will not be two different series called "Evil Dead" making movies alongside one another.

When Sam Raimi recently admitted that he was going to work on an Evil Dead 4 this summer (something that he later admitted he'd felt pressured into promising by fans), it seemed like odd timing.

After more than 20 years since Army of Darkness closed out the original Evil Dead trilogy, the filmmaker waited until there was a remake (and now a sequel to that remake) in progress before making a fourth film? It seemed counterintuitive, especially since if the first movie is a big enough success to warrant sequels, you would run the risk of having Raimi take so long to produce Evil Dead 4 and beyond that the two franchises could inadvertently overlap.

But the title change between Evil Dead 2 and the third film, titled Army of Darkness, arguably provides a perfect opportunity for Raimi and star Bruce Campbell to continue their franchise even while cashing the royalty checks from Sony's remakes, which are rumored to be planned as a trilogy as well.

"That would be Army of Darkness 2," producer Rob Tappert said at last night's Q&A session at South by Southwest when asked about Raimi's sequel. "Everybody calls it Evil Dead 4, but Army Of Darkness wasn't called Evil Dead anywhere except by the fans."

Campbell, who is assumed to be coming back to reprise his role as series lead Ash, added, "Sam threatens this every six months. I've heard this a thousand times because in the back of his mind, he never wants to let go because he loved making those movies. We all loved making them together. They were a nightmare to make, very difficult, but they lasted the test of time, so he's not going to let that go, and I'm never going to say 'no.' It'll be me and a walker fighting some other old guy. But that's what he does and who knows? It may happen."

SXSW: Evil Dead 4 Will Be Called Army of Darkness 2

Alexa Bliss and Nikki Cross Talk Tag Team, Why This Year's WrestleMania Made Them So Nervous