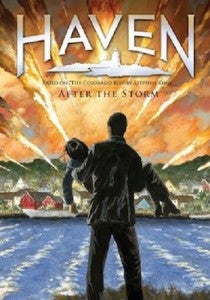 Yesterday, Syfy announced Haven: After the Storm, a new, original graphic novel set in the world of the series. Syfy's hit drama is based on The Colorado Kid by Stephen King, who is no stranger to comics. In addition to having co-written the first arc of Scott Snyder and Rafael Albuquerque's American Vampire, he's seen adaptations of his work in long-running Marvel series based on The Stand and The Dark Tower. The 16-page comic will be released as part of the Haven Season Three box set, written by the series writers assistant Nick Parker drawn by The Only Living Boy artist Steve Ellis. Scott Hampton of The Graveyard Book provides the cover. The story will deal with the immediate aftermath of the season finale and lead into Season Four's premiere, not too dissimilar from what The CW's Arrow did this year, staging one of their digital-first comics after the end of the finale and then putting the comic on hiatus until the show returns in the fall.