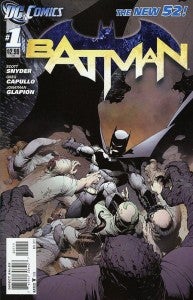 With line-wide sellouts and reailers all over the country increasing their orders on the second issues, DC's "New 52" relaunch has widely been considered a sales success since it began just over a month ago. Well, the sales information released this morning from Diamond Comics Distributors seems to have confirmed that in a big way. According to their comparative sales data for the month of September, not only did DC take top marketshare both in terms of units shipped and dollars generated (a rarity that, according to Newsarama, hadn't happened since 2007), but DC's #1s accounted for 17 of the top 20 selling single-issue comics last month, with Marvel only appearing on the list at #8 (Fear Itself #6), #9 (the much-ballyhooed Ultimate Comics Spider-Man #1) and #18 (Amazing Spider-Man #669). Batman #1 was the top seller for September, narrowly edging out its closest competitor, Action Comics #1. Both comics sold over 200,000 copies, according to earlier statements by DC Comics.The remaining 15 of the top 20 books in September were, in order of sales, Green Lantern #1, The Flash #1, Superman #1, Detective Comics #1, Batman: The Dark Knight #1, Batman & Robin#1, Green Lantern: New Guardians#1, Batgirl#1, Wonder Woman#1, Green Lantern Corps#1, Teen Titans#1, Aquaman#1, Batwoman#1, Red Lanterns #1 and Justice League Dark #1. To extend beyond the top 20, Marvel starts to make more frequent appearances in the top sellers, but all 52 of DC's #1s are in the Diamond top 100 for the month (with OMAC taking up the rear at #82) and three more first issues--two by DC and one by Marvel--rounding out the top 25 (Nightwing #1, Ultimate Comics X-Men #1 and Justice League International #1). Actual numbers are not provided by Diamond, only a comparative percentage of how the books performed relative to the #1 title. That said, it has been widely reported that something close to 20% of returnable books are not counted until their returnability window is closed, so many of the sales of DC's #1 books may go up by year's end. It seems unlikely to see large numbers of returns on books which have had retailers ordering second prints.