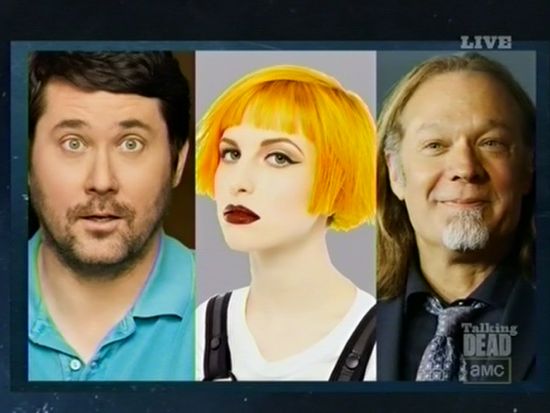 After tonight’s “Infected” episode of The Walking Dead, there is an hour long Talking Dead. Chris Hardwick is the host of the Talking Dead.

On tonight’s episode of Talking Dead, the celebrity guests are comedian Doug Benson and singer Hayley Williams. Doug Benson is best known as a stand-up comedian who has appeared on Comedy Central Presents, Best Week Ever and Last Comic Standing. Hayley Williams is the lead vocalist of the American rock band Paramore.

There will also be at least one guest from the Walking Dead appearing. The announced Walking Dead guess is Greg Nicotero, who is an executive producer, director, and special effects make-up artist on the show. It’s also possible that there could be a mystery guest from The Walking Dead, as sometimes Talking Dead keeps guest names secret so as to not spoil who might have died on the latest Walking Dead episode.