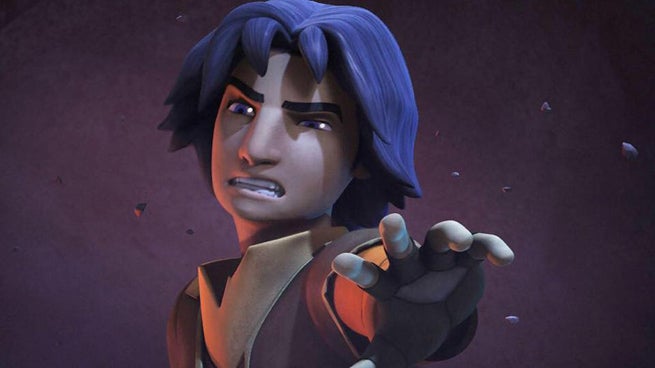 For Star Wars Day, ComicBook.com is spending all day with some of our favorite castmembers of Star Wars Rebels. We talk about Season One, tease a bit more for Season Two, and learn about the next twists and turns on the way.

When we first met Ezra Bridger, he was nothing but some random street rat on the outer rim world of Lothal. Through him, however, we were introduced to a well-oiled machine of a team, a group of individuals who had every ability to make a difference, and made sure they darn well did.

Throughout season one, Star Wars Rebels was all about each character's turning points, including Ezra's growth from a seemingly random orphan to a padawan. Indeed, Ezra went through his own Jedi trials and became a capable, intelligent, helpful, and proud member of the team.

At the Season Two premiere at Star Wars Celebration Anaheim, we spoke with Taylor Gray, the actor who portrays young Ezra, about the season behind him and the developments ahead.

Season One was really about turning points. Ezra's big turning point was obviously his first true Jedi trial, obtaining his own crystal. What was it like when you got that script and found out you'd really be going full Force (pardon the pun)?

Taylor Gray: It confused me at first! I didn't quite understand, I was like, what's happening? "Dave, what's going on here?" You have to finish the whole script to really understand what was actually going on.

But it was so cool, and it made sense. At the time, when I was reading it, I was just thinking "Oh my god, what am I about to do?" But when we finished it, and seeing the episode, it really is a turning point; it shows a lot of growth for Ezra, and I think it is a big step for him turning the corner to become a true Jedi.

We see most young Jedi struggling against the Darkness a bit, and it looks like we'll see that in season two, from the trailer…

TG: That's a great question, and it definitely pertains to season 2 and hopefully further. Ezra definitely shows signs of maybe a propensity to go that way, to the Dark Side. Because of how he grew up, he feels so jaded towards everybody. He was on his own, and he hates the Empire, but he also didn't really like anyone to start out with; it's the perfect recipe for someone strong in the Force to go to the Dark Side. Luckily, he has Kanan and the Rebels, and Kanan definitely recognizes that he could possibly go that way.

But yeah, season two will definitely see some trials for Ezra and his struggle as he trains in the ways of the Jedi.

You've done a good job with the balancing act of being a loner who seems to want his loneliness, but also someone who wants to bring people into his life. What do you pull from when you're trying to portray those moments?

TG: Thanks, man. One, it's the writing. It's the mindset and the place that they're putting him to start out, Dave Filoni and every great writer on this series. From there, I feel like we can all relate to that. The biggest thing that I always carry when I'm playing Ezra is this confidence that he has. So that carries into the sense that "I can do all things on my own;" that's the mindset that I'm in as Ezra. Pulling from things in my life, we all have moments where we want to tell ourselves, "I don't need anything or anyone," stuff like that.

It's so fun, and it's cool, because I'm able to work my voice more so. On-screen acting jobs you're able to portray emotions with your face, but with this you don't have that to work with. I've been trying to balance and learn to show my emotions with just my voice in scenes like this.

Obviously, you had lots of great scenes with Zeb and with Kanan in season one; who are you looking forward to or enjoying playing off with more in season two?

TG: We showed Hondo is in season two in the trailer, so I'm not spoiling anything. He's super fun to play off with. That whole dynamic, you can sort of see how those two could go together. There are some really exciting scenes with him, especially with Ezra and Hondo that I hope people will enjoy as much as I did.