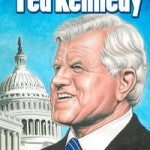 Bluewater Productions, the publisher of an ongoing list of comic books surrounding political figures, announced they are producing a Ted Kennedy bio just prior to the Senator's passing. 'Political Power: Ted Kennedy' will cover the Senator's life, from his early youth all the way through is distinguished career in the Senate.

"You might not agree with his views. But you have to agree that Ted Kennedy is an American icon of politics," said Bluewater president Darren G. Davis.

Davis noted that while this isn't the first volume of 'Political Power' to be published (books of President Obama, Sarah Palin, and others have been on the market for some time now), the Kennedy book was the first to be approved for production. The timing of the announcement is just bad luck, but it also could serve to be a great way for admirers to remember the Senator. 'Political Power: Ted Kennedy' hits stores this November.

Ted Kennedy Comic Book Released Just Prior To His Death