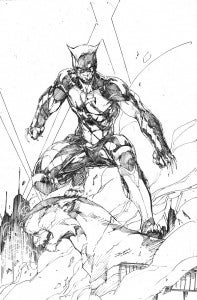 January's Teen Titans #16 will be artist Brett Booth's final issue on the series, according to a blog post by the artist made this weekend.

"Just finishing up [Teen Titans] 15 today," wrote Booth on his personal blog. "I should be starting my final issue next week!"

"TT is a lot of work, so much so that I had to forgo time off, fixing things up around the house and even building that new addition I was planning on. I'm up late almost every night trying to keep the book on schedule. With the added work of character designs for other books, around issue 10 it just got to be too much. So after issue 16 (DC wanted me to stay on for the big Joker Event) I'll be switching to another book at DC.

"Remember I was on JLA before this, so that's a lot of team stuff. I'm a single character guy at heart and I prefer those kind of books.

"So I'll still be at DC, just on another book."

It's not clear whether he's done so for Teen Titans or his next project, but the same blog post included the revelation that Booth has just finished redesigning a DC character for the New 52. The image above, which features Catman of the Secret Six, is NOT that character but is typical of the redesigns that Booth frequently does on his blog for recreational purposes.