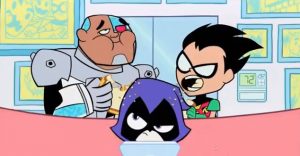 The first official promo for Teen Titans Go! has appeared online via a fan's YouTube page.

The trailer, which appears to have been ripped digitally off TV, is watermarked and low resolution but still gives a pretty good look at what to expect from the show, which will be more humor-oriented and all-ages-friendly than its predecessor, the about-to-end Young Justice.

This weekend, fans will see the finale of both Young Justice and Green Lantern: The Animated Series, which will be replaced in the DC Nation programming block on Cartoon Network by Teen Titans Go! and Beware the Batman, starting this summer. Teen Titans Go! will reunite the same characters and voice cast as Teen Titans, the fan-favorite Cartoon Network series that ran from 2003-2006.  Back then, fans objected to Teen Titans' cancellation, though at present few are happy to see the band back together as they're upset about the end of Young Justice.