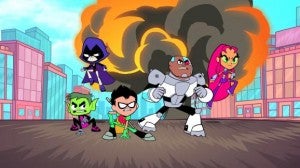 The series will premiere on Tuesday, April 23, at 7:30pm (ET/PT) and be rebroadcast during the DC Nation block on Saturday mornings at 10:30am (ET/PT) beginning April 27.

Even though fans have been somewhat skeptical of the new shows since the announcement that both Young Justice and Green Lantern: The Animated Series would be cancelled, here's some news that will probably put some viewers at ease: The principal voice cast from the original Teen Titans series, based on DC Comics characters, will reprise their roles in Teen Titans Go!, with Scott Menville as the voice of Robin, the slightly power-mad perfectionist and leader of the Teen Titans. Hynden Walch voices Starfire, an alien struggling to fit in; Tara Strong voices Raven, the sardonic, deadpan demon girl; Greg Cipes returns as the slightly dim but always loveable loafer, Beast Boy; and Khary Payton provides the voice of Cyborg, a laidback kid who is half teen, half robot.

The fan-favorite theme song from the original Teen Titans will also be making its return to television, with an updated remix from Mix Master Mike of the Beastie Boys