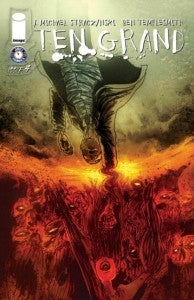 CP Smith will take over as the artist on J. Michael Straczynski's Ten Grand following Straczynski's decision to replace artist Ben Templesmith, the writer announced via his Facebook page. Straczynski cites problems with deadlines and a lack of communication with editorial as a reason for removing Templesmith from the book, while praising the quality of the work and noting that he would hire Templesmith again if he were working on something that didn't have a monthly deadline and retailers waiting on it. "With Ten Grand, once the script went out to Ben, we would often hear nothing back, despite repeated requests for updates. Most recently, we gave Ben a full script on July 26th. It is now September 4th, and we have still not heard anything back from him, despite repeated emails asking where things were, nor have we gotten any pages. I even tweeted him on August 25th just to make sure he was okay, and though we still didn't hear back from him, we did hear through others that he's all right, which is the important thing," wrote Straczynski. "From time to time, every artist and writer falls behind or runs into trouble with the work; I am not only marching in that parade, I am carrying a banner. But there still has to be some level of communication so that all parties can plan out publishing schedules and make adjustments where needed. So on August 27th, I emailed Ben to say that if we didn't hear something back by the end of that week, even just a text to say he was underwater, that we would have to find another artist. I wanted to give him every possible opportunity to come back and make this work. No reply. Finally, and with tremendous reluctance, I sent him a note on the 31st saying that we were moving on. Our obligation to our readers and the retailers has to come first. " Templesmith has yet to make a public response that we can find; his Twitter account has been silent since early August.

Congress Currently Holding First Hearing on UFOs in Over 50 Years

WWE: Pro Wrestlers React and Rally Behind Sasha Banks and Naomi Walking Out