Since famed comics writer Peter David suffered a stroke recently while on vacation in Florida, fans have been eagerly awaiting to hear news of progress in his recovery. As such, there's quite a bit of discussion of David's extensive body of work going around, either from fans looking to buy some stuff that will help him out financially or even just from those who see him in the headlines a bunch and say, "I should get caught up!" Here are our picks for some of the best, most essential Peter David stories--in many cases, we're not going to single out a particular issue or story as the "key" because there are a few instances where David has done a long, impressive run on a title--but even then we'll do our best to at least mention a couple of specifics. 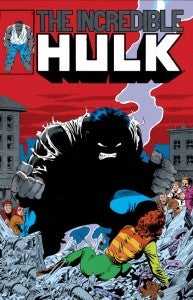 1. The Incredible Hulk Peter David is, for many fans, the best Hulk writer since Stan Lee. The character has often been criticized as being somewhat one-note, but that  was curbed significantly after David's long-lasting, fan-favorite run on the title. Some highlights include the introduction of Mr. Fixit, a version of the Hulk much different from the traditional green rage monster, who's gray, a bit more civilized...but still just as much of a burden on Bruce Banner's life (he once drank the contents of a liquor store, just to stick Banner with the next day's hangover). There are literally dozens of collected editions, novels, graphic novels and more by Peter David based on Hulk and his cousin She-Hulk, including Hulk: The End and eight volumes of Hulk Visionaries: Peter David graphic novels...but the high point (and arguably the best single Hulk story ever told) has to be The Incredible Hulk: Future Imperfect, in which Banner seeks a permanent cure for his condition, ending The Hulk as we know it as he's being pursued for crimes he didn't commit. That said, the stories Lest Darkness Come, Ground Zero and The End are all pretty solid material as well. David has returned to the Jade Giant time and again, often serving as the go-to writer for Marvel when they need to do something big and ambitious, an anniversary issue or anything like that. His most recent outing with the character was a bit more team-centric, though, as he wrote The Avengers Season One, an original graphic novel included with a Wal-Mart exclusive version of Marvel's The Avengers on Blu-ray. 2. Star Trek: The Best of Peter David Peter David has written more official Star Trek novels than just about anybody and, yes, every so often he pilots the enterprise through the comics industry. There is actually a graphic novel that's specific to this, collecting five of David's best stand-alone Star Trek stories written between 1988 and 1991. One of them even features art by legendary Superman artist Curt Swan. You can't beat that!

3. Aquaman The real standouts here are of course The Atlantis Chronicles and Time and Tide, a pair of stories that basically lay the groundwork for the post-Crisis on Infinite Earths, pre-Infinite Crisis Aquaman. Still, David's overall run on the character is considered to be one of the best and most influential in Aquaman's history, and one of the only runs in the last thirty years that's almost universally liked by fans. It's also the one that set the stage for Grant Morrison's JLA, and gave fans the "hook-handed Aquaman," a trope so popular that even after the Silver Age worshipers currently running DC Comics undid it, they went back to revisit it one more time during Brightest Day. 4. Supergirl The most popular issue of Peter David's Supergirl is arguably the one where the Matrix/Linda Danvers Supergirl he had  been writing all along got to interact with her pre-Crisis on Infinite Earths counterpart and travel the multiverse, titled "Many Happy Returns." 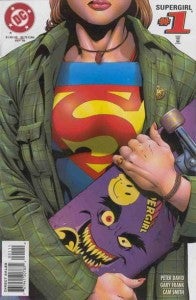 By that time, the earth-born angel aspect of the character had started to wear itself somewhat thin with the casual fans and many were clamoring for the return of Kara Zor-El (which, of course, they eventually got as part of Jeph Loeb and company's campaign to return the pre-Crisis status quo to the Superman titles). It's maybe easy to forget, then, that the early issues of David's Supergirl--and particularly the first arc--were so good that they captivated an audience that was already, broadly speaking, pretty ready to be against that particular, editorially-mandated version of Supergirl getting her own book. David did pretty well with the Matrix Supergirl, and it made this book, which began in 1996, one of the last vestiges of the Man of Steel Superman philosophy that he was truly the Last Son of Krypton (no others floating around on a regular basis) and that the titles should be somewhat more grounded, accessible and character-driven. 5. Fallen Angel The series, which began its life at DC Comics but then eventually moved to IDW, was in many ways the continuation of the Supergirl storyline. It explored the same themes and dealt with the same kinds of threats...and during the time the comic was at DC, David skirted the issue of whether the character was, in fact, the same person as the Supergirl he had been writing. It was only after a move to IDW that David clarified his main character was not, in fact, the altered Supergirl he had built while at DC. Of course, it wasn't long before he introduced the lead character's "predecessor," Lin, who had an oddly familiar way about her. 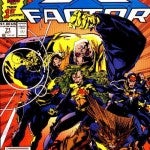 6. X-Factor (Take One) Peter David's original run on X-Factor took the team, originally conceived to be a landing place for the First Class X-Men who had no title at the time since the Claremont-era X-Men were so much more popular, and handed the book over to a group of also-rans led by Havok. As often happens on a title like this (Gail Simone's Secret Six and the Giffen/DeMatteis Justice League titles), taking on a group of characters with fairly little baggage and not a ton of name recognition can give the writer an opportunity to essentially rebuild the characters from the ground up--which is what David did, bringing depth and heart to characters other writers could (and did) easily dismiss as jokes or one-note characters (like Strong Guy and Multiple Man, for instance). 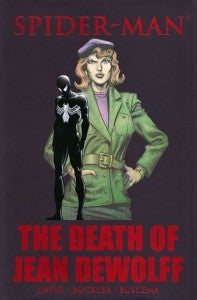 7. The Death of Jean DeWolff Peter David's run on Spider-Man may not be as monumental as some of his work on other characters (again, he's a creator who seems to do best when he can reinvent the wheel and, as we've seen, reinventing Spider-Man doesn't always make you a lot of friends), his first big Spidey story remains one of those captivating reads that has really only fallen into relative anonymity because it was so rooted in the comics of its time. DeWolff, after all, is not a character many fans think of as essential to the Spider-Man mythology. Existing for only about ten years, DeWolff was a police captain whose ex-boyfriend was a villain called Sin-Eater (can't imagine why that didn't work out), who ultimately killed her. Spider-Man was racked with guilt over the death of yet another person close to him, and it made for a compelling exploration of his character, the way that tragedy shapes superheroes in general, and how far is too far when you're trying to exact justice for something like this. After all, in the movies and on TV, it's generally accepted that a rampage culminating in the death of the killer is the Only Appropriate Response to the death of a supporting character, especially if it's dramatic enough to really torture the hero. In comics, though, it's a bit less clear-cut, with the "no-kill" rule generally kept in place, especially for the top-tier superheroes like Superman and Spider-Man.  8. Madrox and Beyond Sure, we already named Peter David's X-Factor one of the ten best ongoing series of 2012, but let's face it--it's worth praising again here. After years away, David returned to X-Factor with a Madrox miniseries, which cast Multiple Man as a private detective and played to the more down-to-earth power levels of many of his former X-Factor teammates. The story was so well-received that not only did it turn into an X-Factor ongoing gig for which David has now written nearly 100 issues...but Cougar Town executive producer Kevin Biegel recommended it to Joss Whedon as a potential ABC/Marvel TV series. 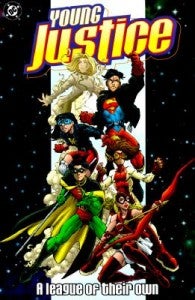 9. Young Justice No, not the cartoon series. You see, young'uns, back in the day we had a version of Young Justice composed of the Tim Drake Robin (he was Robin once, you see), Superboy, Impulse (which is what we called Kid Flash once) and a few others, most of whom never really appeared in another comic book. It's where Superboy and Wonder Girl met, before they got hot and heavy, and back when there was no reasonable measure by which someone would call Wonder Girl "hot." Some of these books are available in collected editions, including the first storyline, "A League of Their Own," which spun out of a crossover where all of the adult DC heroes got turned into kids and the kids into adults and this team--which didn't have a name at the time--had to save the day. It's a hilarious book in the vein of the Giffen/DeMatteis Justice League, which had been gone for just long enough to give certain fans an amount of nostalgia for it even then, with some great character beats and arguably the best use for Red Tornado in this writer's lifetime. 10. Spyboy Another opportunity for David to flex his muscles writing young heroes, Spyboy was a fun romp through the espionage world that recalls a bit of Chuck, a bit of Young Justice and a very high-stakes game of S.H.I.R.T.S. versus S.K.I.N.S.