Last week marked the twentieth issue of Rachel Rising, Terry Moore's Eisner-nominated comic book series about a murder victim who woke up in her shallow grave and embarked on a bizarre, supernatural odyssey.

With a TV series in development and Moore's original concept for the series entering into its third act, it's beginning to be "anything goes" time in the town of Manson, where Rachel, her best friend Jett (who, coincidentally, was her boyfriend in another life) and their strange little group of friends and foes have been living variations on the same lives for centuries, preparing for the day when a demon called Malus would make his move.

Well, this month it happened...and Terry Moore sat down with ComicBook.com to talk about it.

Remember that our interviews are SPOILER-FILLED. If you haven't yet, please buy a copy of Rachel Rising #20 and read along with us. 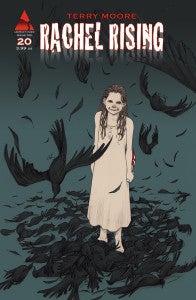 ComicBook.com: You know, your Jack the Ripper poem sounds suspiciously like the Ten Little Butterflies book my toddler loves. And now that's ruined. Terry Moore: It's the dark side of The Butterfly Effect. ComicBook.com: Is it intentional that he plume of smoke winding up around the cross in that first sequence looks very snake-like? Moore: Yes. The serpentine evil slithering past the icon of good. ComicBook.com: Is there a bit of a struggle here going on between the priest's feeling that he's the steward of this tradition versus being the servant of whatever it is that Zoe represents? Moore: Well, the priest is really Malus, and he serves only one master. Simple, right? But he wants off this planet and that's not gonna happen until the human race is wiped out. So, he has The Plan. The problem is, Zoe doesn't care. And I would say when Zoe slashes the priest to ribbons, that's a bit of struggle. ComicBook.com: I can't quite tell whether his assent to Zoe is real or not... Moore: As the old poem once said, [He] has reasons, astounding astronomers but oh delighting me. ComicBook.com: How much time has elapsed, in-story, over the course of the last few issues? Because I know it's not so but it seems like those bodies have been lying on the floor for a very long time. Moore: It was a couple of hours. ComicBook.com: There's a bit of recapping in the dialogue in this issue; is this the first bit of a new trade, or are you just feeling like you need to keep the readers up to speed since the revelations of last issue were so huge? 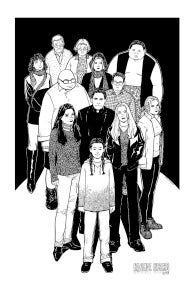 Moore: I've learned to try and be very clear about the important points. And for the comics readers, it's been at least six weeks since the last chapter. I try to keep it natural, such as briefing a new person in the room, in this case Earl. ComicBook.com: I think the "squish squish" SFX were inspired, by the way. It definitely added a bit of levity to the scene. Moore: Good. Then it worked. You know what it made me think of, The Forty Year Old Virgin line: "You know how when you touch breasts and they're... really hard." (laugh) ComicBook.com: Hey! The departing soul visual from #1! Now we know that Rachel can see it happening! Moore: Part of her gift. ComicBook.com: And, wait, since we've seen that image associated with Rachel, does that mean there was another Rachel who vacated the body for Bryn Erin to come in? Moore: I can't discuss that with you... yet. ComicBook.com: If so, how does Bryn Erin retain so many of Rachel's memories? Moore: The question of who's driving in these dual characters is tricky, and I'm being very careful to keep them sorted correctly so when it's all done you can go back and trace the lineage. Hopefully it will all make sense when it's done. Memories are not turned off, but who has the stronger presence makes a difference. For instance, Malus used Jet's body and knew how to navigate her life, but when he left she doesn't remember him. Now James is dominant in Jet, and though he is freaked out to wake up in this body and time, there is enough subconscious brain function to allow him to navigate the people and settings. He's more than just James, he has Jet's data base, even if it is subliminal. It's a complex thing to explain, but the rules should become more apparent as we watch it play it. 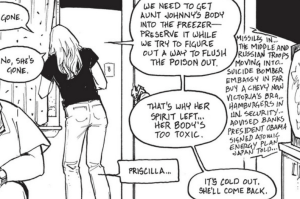 ComicBook.com: That kind of buzz-wordy, white-noisy news report reminds me of some of the stuff you used to have going in the background during Strangers in Paradise. It's been a while since you did that. Moore: Yeah. I miss that technique. It's very useful in such situations. ComicBook.com: And now I think of it, that's the kind of thing that doesn't carry over from comics to prose, does it? It's not something, I'd imagine, we're likely to see in the Strangers in Paradise novel. Moore: It's not a prose device, but I would love to introduce a few new devices to the form. I felt like I added a few things to the cartoonist's toolbox. It would be nice to find an enhanced way to write that pulled the reader into a deeper experience. That's what fiction hopes for, isn't it? ComicBook.com: And, hey! The box! We finally get a sense for what's inside it--but will we ever get a concrete connection to Echo? Moore: Time will tell. ComicBook.com: So I'm going to leave the questions above that I wrote earlier in spite of the ending here. What happened with all of this? Did Malus believe himself to be more in control than he was of the physical bodies or doesn't it matter since he can operate on another level anyway? Moore: There is no stopping Malus, my friend. Get your affairs in order, you have five years.

Terry Moore on Rachel Rising #20 and Jack the Ripper--You Know, For Kids!